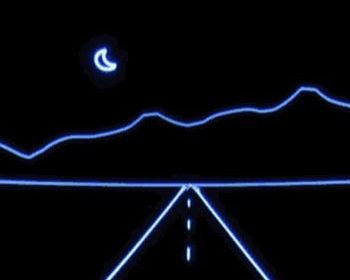 Midnight Television is one of the original artist in the subgenre known as “late night lo-fi.” Contrary to (faux-)utopian, ECCOJAMS, futurevisions, and other such scenes, late night lo-fi utilizes a mix of musical and non-musical samples while presenting them in a distinctly apolitical light that contains little of the commentary or self-parody common within the scene. Albums here are made to evoke the feeling of leaving on your tube television set through the night as the vague sounds of infomercials, advertisements, and talk shows filter into your living room. It’s by far the most nostalgic and past-thinking part of the scene.

Released early on in the vaporwave scene via Beer on the Rug (which also houses the highly influential Vektroid), Midnight Television is an extremely short extended-play at seven tracks whose total run-time barely ekes over the ten-minute mark. Songs are entirely instrumental synth-funk samples with the subgenre’s characteristic ultra-low-fidelity, as if they were taken from old VHS tapes. “After Party” is the best-produced (insofar as such a thing exists on this release) and subsequently is a minor hiccup in the album’s overall aesthetic.

This isn’t a record that one will put on because they want to jam out – save that for Blank Banshee – but to dive headfirst into that curious world of staticky late-night television where the mass media market hadn’t quite yet caught up with the technology.1

1And ya gotta love those Vetrex-esque graphics in the album artwork.

Vektroid and Siddiq self-release “NO TITLE” as PALACIO DEL RIO