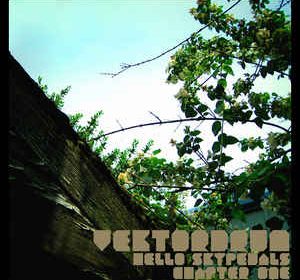 Vektordrum is an early alias of Ramona Xavier, whose other projects include Vektroid, fuji grid tv, and Macintosh Plus. Hello Skypedals EP1 is a 2009 release that – at forty-three minutes in length – makes one curious how long LP1 would’ve been. Although it’s only a year younger than the vaporwave catalyst of the New Dreams Ltd. and Vektroid projects, Hello Skypedals EP1 is unlike almost anything from the Vektroid releases and beyond, having far more in common with Emeralds, early Boards of Canada, and Steve Hauschildt by way of droney lo-fi soundscapes with influences from early IDM and downtempo electronica. Titles like “Vanish NGC” and “The Spire M17” are spacey, evoking that kind of childish wonder at the stars. Also, fun fact: both album and artwork are licensed by under Creative Commons.1

Starting from the top: “Kodiak Antenna Farm” is the closest the album gets to that Boards of Canada feeling, with an ebullient, swirling electronic melody playing over a deeply processed keyboard lead. “Vanish NGC” continues that thought for ten minutes, adding bass lines and breakbeat percussion before getting a bit chiptune around the seven-minute mark. “Eagle Filter” uses similar downtempo electronica tropes, but changes it up a bit for some crawling arpeggios and bloops that layer on top of each other throughout the track’s nigh-eight-minute length. “Sandstreams (Nonimx)” is LOUD, beginning with a dampened piano key that extends into mid-career Autechre/IDM territories. It’s a remix by Nonima from a track off of Unreleased Tracks Vol. 1, also released under the Vektordrum moniker. “The Spire M17” brings back the ambient a bit with a somewhat glitchy piano key, with even more ambient coming by way of the one-minute “Into Further Depths of Nullity.” Closing track “Collonade Supernova”2 is fourteen minutes of the same swirling ambiance of “Kodiak Antenna Farm,” produced as to be background music for your night out under the stars.

1Source here. You can also download the album from that Archive link, as well.
2Collonade supernova in the skyyyyyyyy.