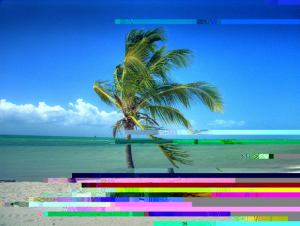 A Word from the Editor:

Sunbleach Media published its first article on 30 May 2016, exactly one year ago today. Wow. That’s insane. It feels like yesterday that I was chilling in a small coffee shop in Alaska, contemplating the retirement of SongSavers and drawing up preliminary designs for a new platform that would exclusively focus on vaporwave. By then, it had become one of my favorite music genres, and I both wished to learn more and wanted to share what I had learned with others.

Sunbleach was originally developed by a dude who loves vaporwave1 (and later: dreampunk, progressive electronica, and ghost tech) who just wanted to get his thoughts down. It started with a text file on my computer on which I’d write whenever a certain phrase turned in my mind that I wanted to save for thinking about later – a method that lays the foundation for each and every article on Sunbleach to this day. Most articles come about while I’m reading a book, working on draft publications for work, or heading to a new hiking destination with my dog; I try to make a point of listening to albums multiple times in different settings so that my thoughts on an album aren’t byproducts of the environment.

Writing about music has been a passion of mine for years, stretching back to when I wrote informational blurbs for new releases as a part of the music department at WVFS Tallahassee. That method of writing has carried over to the way Sunbleach operates in its new music articles and in its review articles: talking about what the music sounds like rather than how it makes me feel; a more objective approach to music rather than one based on my subjective experience of it. Additionally, I say “writing about music” rather than “music criticism” on purpose: Sunbleach never has been and never will be a “critic’s” platform. If you want critics, there are already plenty. My attempt with Sunbleach is to create a curated space that helps listeners navigate the world of vaporwave that – by its very nature – can lead itself to discursiveness and confusion in the psuedo-anonymous world.

Starting a couple months into the existence of Sunbleach, I made the conscious choice to treat album articles as spaces to describe the music rather than to comment on it – with the exception of works that are culturally or historically important to the genre’s development. That’s part of why Sunbleach does not have “ratings”, but “recommendations”. Since the world of vaporwave is so interconnected and practically none of us are in it for the money as much as the art (and fun) for its own sake, it’s better to praise parts of albums that facilitate their goal and offer directions for improvement next time instead of cleverly trashing someone’s last few weeks in a creative writing exercise. I hope that I have succeeded in that regard. If I have not, then I hope that I have the ability to work toward it even more – and I hope that you call me out on it!2

I love this wacky culture of vaporwave. This past year has been some of the most fun I’ve had in music since DJing my Wednesday 10PM-2AM Metal Madness shift at V89. It’s immensely rewarding to wake up to messages telling me that one of my articles turned someone onto their new favorite artist, label, or even genre – and even more so to realize that the song to which I’m listening totally be heard by all of you out there. If Sunbleach can continue to be a resource for you to discover new music, learn new facts, and maybe even help you become a better producer or artist, then for what else could I ask?

I hope that you’ve enjoyed reading Sunbleach as much as I have enjoyed writing it for you. Thank you, and shine on.

Now that the sentimental part is out of the way, it’s time to discuss the current state of Sunbleach and the immediate (plus not-so-immediate) future. No, don’t worry, I have no plans to make this website go away any time soon – and the recent lull in articles is due to a brutal upper respiratory infection from the last ten days that was so gross, Autopsy should write a song about it.

The normal baseline of Sunbleach has been new music updates five to seven days per week, four to six album articles per week, and Monday night album-of-the-week articles. The releases of interviews, features, and visual artwork has been far more sporadic. I plan to get publications a bit more timely in the latter group. My goal is to have two to three interviews published per month, four to five feature articles per month, and weekly visual art updates every Friday. Our label-of-the-week articles have been successful in getting people to know about some prominent and underground elements of the vaporwave scene. Ideally, I’d like to do a label-of-the-week article every month, but they take an enormous amount of time to put together, so for now I’m thinking of them being a once-every-two-months sort of deal.

Speaking of features, the following ideas are currently being planned/kicked around. I am not wedded to any of the names yet; they could certainly change as the features continue to develop:

As for the long-term: I considered opening up Sunbleach to the broader realm of “cyberpunk music”. I decided to forego that option; Sunbleach will continue to remain a resource primarily devoted to vaporwave. I worry that opening Sunbleach to be a cyberpunk web site would naturally exclude many of the underground artists and labels to which Sunbleach was founded to cater. Vaporwave as a whole is not a genre that gets much mainstream attention outside of several select artists and labels; Sunbleach serves its niche well, and there’s no point in taking that away from readers and producers. Plus, it would be less fun for me.3 This being said, Sunbleach will continue to cover music from genres, movements, and labels that are distinct from but culturally and thematically connected to vaporwave, such as the ghost tech and dreampunk scenes. Some artists or albums will be featured that are not vaporwave-related but come from artists who are extremely important to the scene, such as Oneohtrix Point Never, but these articles will be very few and far between, so please do not expect them.

I am also looking to translate some of our most popular articles into different languages. If you are fluent in a language in addition to English and would like to be a part of that endeavor, please get in touch via the Contact page.

Sunbleach has a Twitter handle (@Sunbleach_Media) but no Facebook. As much as I kind of dislike the amount of time needed to manage a social media presence, I recognize that it is an important part of Internet cultures, and it is an effective way of informing readers of what’s new and exciting out there. Expect that to start in the upcoming few weeks.

Once again, thank you for reading, and I look forward to sharing more with you in the future!

Finally, for those of you who are curious on our stats from the first year, here are some posting data:

1… and heavy metal.
2I still feel bad about that article on SURFING’s Deep Fantasy. If you’re wondering why you can’t find it anymore, it’s because it’s a terrible write-up that relied on me completely misunderstanding the way by which SURFING utilizes samplism. It’ll come back one day when I revisit that album.
3The most important part!

Beer on the Rug releases “WANDELEN” by De Tuinen