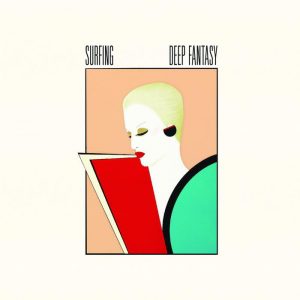 Refresh is a series of articles that revisits albums that received inadequate or erroneous interpretations by Sunbleach in the past. The goal of these articles is to examine the albums under a new light with discussions on what earlier articles possibly got wrong in their original recommendations. The first album to be discussed is the chillwave/classic-style vaporwave release Deep Fantasy by S U R F I N G (henceforth “SURFING”).

On 17 August 2016, Sunbleach released a negative recommendation of Deep Fantasy by Australian duo SURFING. The article opened by calling it “plagiarism”, saying that Deep Fantasy would have been “forgotten” if it weren’t for its release toward the beginning of vaporwave’s history, and insinuating that Deep Fantasy was little more than a cash grab. Two months later, I received this comment from “fuck your blog lol@gmail.com”:

lol at your pathetic website and pathetic review
have you made an album before ?
Surfing combined sampling and original instruments (lead guitar, bass guitar, flute, vocals, bongos) on Deep Fantasy. Who are you to say who can sample and who cant? Most people would agree that flipping a sample and THEN adding your own instrumentation and vocals is going above and beyond basic sampling yet your article brushes this off, Mac Plus did not add any original content im pretty sure

Wow. I guess I fucked up pretty hard on that one, huh? Well, FYBLOL was right, and his acidity was justified. Listening to Deep Fantasy1 again, I realized how much of the album was actually a pretty impressive mix of live instrumentation and sampled material combined together in a way similar to Washed Out. To be frank, I got it extremely wrong. For whatever reason2 I focused entirely on the samplism without giving any attention to live effects that made Deep Fantasy waaaaay more than – in my own words – “sample-heavy with minimal editing.” The original article has since been hidden from public viewing because I no longer viewed it as an accurate representation of the work behindDeep Fantasy, although I would be a liar if I said personal embarrassment weren’t a part of that decision.

In contrast to the words of the original article, Deep Fantasy is anything but plagiarism, and it incorporates an impressive variety of vocals, guitar solos, and keyboards on top of heavily processed Kenny G and Jon Hassell samples (to name a few) that form the melodic basis of many of the songs. Deep Fantasy utilizes many classic-style vaporwave tropes (equalization, low-end focus, jump-cut samplism) to emphasize the datedness of the source material, but it’s even more impressive how SURFING was able to do the same to their live instrumentation. If there’s a nadir in my fuck-up, it’s where I didn’t realize that the additional vocals, etc. are so well-blended into the source material to sound like they’re part of the original songs.

Regardless of how the music sounds, SURFING does a technically impressive job of combining live instrumentation and samples in a way that completely eschewed the uncanny valley sought by many vaporwave artists. The close thematic compatibility and tight songwriting separates SURFING from other bands that combined samplism with live instrumentation such as Disco Inferno, which purposely sought extremely disparate samples (e.g. “It’s a Kid’s World”, “Starbound”) to emphasize their anarchic, somewhat Dadaist approach to rock music.3 On the contrary, Deep Fantasy is not anarchic at all; each track and sample has been produced to sound as if it were found from a somewhat degraded cassette that your dad has owned since the eighties, but without the kitsch that such a simile may inspire. Deep Fantasy is a groovy listen, and it incorporates a lot of genuine affection for a decade that many producers lampoon.4

Sunbleach gave Deep Fantasy a bad review back in August 2016, but it wasn’t bad because of the negative recommendation. It was bad because it was blatantly ignorant of the compositional and conceptual methods by which Deep Fantasy was constructed. The excellence of Deep Fantasy is not “entirely due to the source material”, its composition is certainly not “nigh-complete sampling”, and it is certainly not “plagiarism” that exists just “to make money off of […] copy[ing] and past[ing] full songs”.5 Deep Fantasy is a clever appropriation of samples into which the live instrumentation breathes seductive life – something that the original article didn’t bother to recognize in its bull-headed desire to attempt a character assassination. It’s an engaging listen that fully deserves the qualifier “throwback”, and you should absolutely give it a listen.

1Not to be confused with the hardcore punk album of the same name by Canadian group White Lung.
2Probably laziness.
3This band comes highly recommended for any person interested in plunderphonics and post-punk/post-rock. Start with the D.I. Go Pop full-length and the 5 EPs compilation, both of which are available through One Little Indian.
4Eyeliner also did this on High Fashion Mood Music.
5What is this, a Pitchfork review from 2004?

No Problema Tapes releases “A Night in the Cave” by Anguila