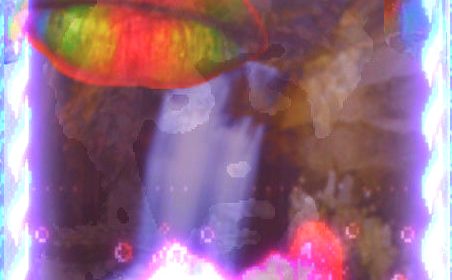 Passion Beam by Coloradan artist Lockbox1 is an old album – at least by vaporwave standards. This November 2012 album was the forty-second release on Ailanthus Recordings, one of the original standard-bearers of vaporwave and modern cyberpunk music. In addition to availability as a free digital download, the initial release of Passion Beam included a cassette edition that has since sold out; at least, the link on Ailanthus Recordings to the Lockbox leads to a dead page. The cassette edition also featured an “exclusive secret album” called Retina Priest on side B, which has not shown up as a rip on the Internet as of five years later.

This release is a contemporary to the score of 2011/2012 vaporwave albums in which noise music was a main compositional element, such as ▣世界から解放され▣ by INTERNET CLUB and ラキア2019 by Hantasi. Passion Beam doesn’t quite go as intensely as those two releases; it uses a mix of ECCOJAMS surrealism and CD-degradation to create what sounds like the effects of pressing a magnet against a computer disc drive while it’s trying to play your mom’s adult contemporary mix.2 This decay is mixed with a classic-style vaporwave lo-fi production. Although this aesthetic has aged somewhat middlingly now that so many albums have taken these tropes and run farther with them, fans of distorted ECCOJAMS will probably get a few spins out of Passion Beam.

1Not to be confused with GOLDBOX, a project on Elemental 95.
2Apologies to those offended by this overwrought Pitchfork simile.

Ailanthus Recordings releases “All My Children” by Treasure Hunt

Seikomart releases “How to resurrect an old FRIEND” by Pokotan91