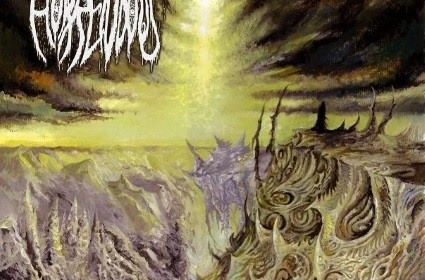 Horrendous is an American death metal band from Philadelphia, Pennsylvania that’s part of the recent trend in new-school, old-school death metal. The Chills features a crunchy guitar tone with somewhat lo-fi and loud production, which moderately reproduces the Morrisound production that characterized a lot of big death metal releases in the early nineties. Released in 2012, The Chills was the first full-length from Horrendous, which was inspired by the down-tuned guitars and stitched-together riffing that characterized the Floridian death metal scene. The album artwork was created by Spanish artist Raúl González, who is known for his twisted landscapes with commissioned works for bands such as Death Fortress and Seprevation.

Those who learned of Horrendous through later full-lengths Ecdysis and Anareta might find it hard to believe that this is the same band. Whereas those two albums had progressive elements and philosophical lyrics (especially Anareta), The Chills is far more indebted to pure old school death metal worship (especially Floridian death metal), resulting in a case of early installment weirdness. Horrendous’s vocals are known for their similarities to Dutch vocalist Martin van Drunen, whose hoarse and scratchy delivery was made famous within death metal culture in bands such as Pestilence and Asphyx. In The Chills, Horrendous opts for a bark/growl, with the hoarseness only occasionally showing up on tracks such as “The Somber (Desolate Winds)” and “Fleshrot”. Additionally, the lyrics focus on themes of gore and death rather than the esoteric themes of later releases.

Compositional elements of note include the ambient interlude of “Sleep Sickness”, the ending to “The Ritual” (which sounds like the theme to Halloween), and the thrashy destruction of “Fleshrot”. The Chills is recommended to fans of old school death metal who want a modern band that isn’t just aping the styles of their predecessors; The Chills is firmly grounded in the styles of twenty years prior, but by no means is it derivative.