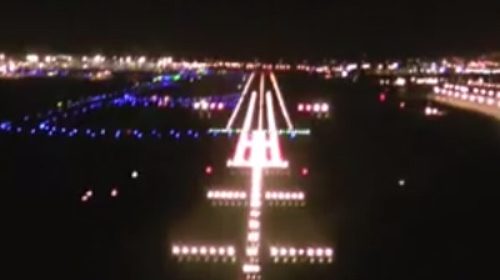 フライトを楽しむ (Enjoy Your Flight!)1 is the second album ever released by Dream Catalogue, way back2 in 2014.3 On the surface, this looks like a standard character-clusterfuck classic-style vaporwave album, but フライトを楽しむ (Enjoy Your Flight!) belies a pretty in-depth release that explores several different vaporwave subgenres in the span of ten tracks and just over twenty minutes. The flying-theme isn’t too prevalent, but there is a general feeling of travel, excitement, and looking out the car window while rain streams down the glass as the city lights flash on by.

It begins haphazardly. The album starts off with “Airglider,” a subdued late night lo-fi track with an audible break in the soft rock sample. It does a decent job at establishing the scene, although its lack of variety sets a somewhat poor example for what follows: classic lo-fi ECCOJAMS, brought to you courtesy of “ハロー雨 (Halo Rain).”4 The sampling here is on-par, but the over-reliance of the minimally-edited sample straddles the line between ECCOJAMS wink-wink nudge-nudge and jadedness.

Well, it’s a damn good thing that フライトを楽しむ (Enjoy Your Flight!)‘s middle is so strong. “A Weekend In Tokyo – 東京の週末 – Speed Lane Driving ✌✌✌” is a glitchy, poppy mess – accurately represented by the equally ostentatious song title – and it’s impossible not to love it. “FIFA World Cup 94” goes back to late night lo-fi, but with a video game bent and new beats on behalf of the producer. “Safe Flight” is even more hazy, with a smooth jazz sample that could come from the many-scratched remains of your Japan Airlines promo diskette. “誰が私は” is the lowest-fidelity song on the album, with more ECCOJAMS-style sampling and some extra synth keyboard underpinning the track; it’s quite impressive, and one wishes “ハロー雨 (Halo Rain)” were produced in kind.

“Flight Attendant” is a great easy listening track with occasional twinkles that are reminiscent of “Tonight May Have to Last Me All My Life” from The Avalanches’ Since I Left You. “[sponsored commercial]” is pure mallsoft, which works oddly well as a pallette-cleanser prior to the classic-style reverb-screw of “Movie Star.” フライトを楽しむ (Enjoy Your Flight!) ends on a sour note with “City ;-P,” which is an ECCOJAMS sample of Jefferson Starship’s “We Built This City,” a song that’s a bit too recognizably-awful to work on its own or in the context of the album; here, 日本航空株式会社 ✈ Japan Airlines5 tries a bit too hard to be self-aware, but the “alright guys, okay” ending sample is chuckle-worthy.

It’s so easy for classic-style vaporwave and its lo-fi variants to be forgettable even as forgettable music, but 日本航空株式会社 ✈ Japan Airlines does quite well at merging several different types of styles into a (mostly) cohesive listening experience. Several of these tracks are good places to start for those who may feel overwhelmed by old-school vaporwave’s many permutations, as フライトを楽しむ (Enjoy Your Flight!) favorably explores many of the genre’s early developments in the context of a later release.

PLUS100 releases “Welcome to Axico Industries” by Remember