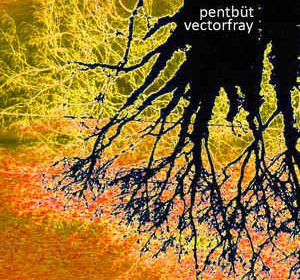 Here’s another release of early Vektroid, and we’re talking really early. Like, 2005 early. Pentbüt1 came out before Vektroid was even a thing – hell, before Vektordrum was even a thing – back when Ramona Xavier produced music as Vectorfray.2 This is German dance music akin to that on labels such as Kompakt and Mille Plateaux back in the early-/mid-2000s, with some significant influence from the intelligent dance community on the tail end of its millennial peak. This is a rather hard release to find; it’s missing from many of the “official” Vektroid discographies, and it has absolutely nothing to do with the modern synth music and vaporwave that typifies her 2010s output.

Pentbüt is nine tracks of sprawling electronic music, much like the dendrites on its cover. It’s one of the very first full-lengths in Xavier’s discography, following the release of several extended-plays that same year. Despite Xavier’s youth – she was barely a teenager upon its release – Pentbüt demonstrates a substantial amount of producer maturity, creating music that surpasses similar-minded artists such as Autechre. Indeed, Pentbüt sounds like what Confield, Draft 7.30, and Untilted would’ve sounded like had the Manchester duo not entirely forsaken melody in pursuit of generative sequencing. Quite a few songs have some jungle textures and breakbeat bits that bookend ambient passages, sounding fresh even if Pentbüt came out almost a decade beyond the heyday of rave.

1German translation: “Penthouse”
2The woman of many names, for real.
3I’m sure there are more that I haven’t caught.
4I’m pretty sure that the energy pick-up sound effect from Super Metroid also makes an appearance, but it’s pretty buried in the mix.

telepath self-releases “Every Time I See Your Eyes”