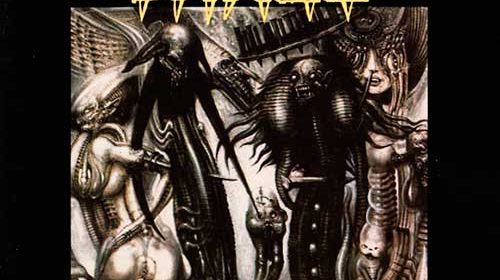 Blasphemy, Conqueror, and Sarcófago get a lot of attention, but there’s one band in particular without whom the concept of war metal would be forever different: Order from Chaos. This Midwestern band started up in Kansas City, Missouri in 1987 and released three blistering full-lengths and a ten EPs/demos over an eight-year run. The band was fronted by Pete Helmkamp, who would go on to found and join several other war metal groups such as Revenge and Angelcorpse. Their debut album was Stillbirth Machine, which came out on Wild Rags in 1992. It features an album artwork of several H.R. Geiger-esque aliens; Geiger also created a second album artwork for the band that went unused but is available in several reissues and in liner notes.

Stillbirth Machine consists of a black/death metal hybrid that was similar to the cacophony of war metal but was more firmly grounded in the death metal than Order from Chaos’s contemporaries. The album has a distinctly filthy production style that is heavy on the bass, but not cavernous like Incantation or dungeon-esque like Torture Rack; it’s a crunch and grind. “The Edge of Forever” features a couple guitar strums low on the fret board that sound like a sci-fi blaster being shot. Stillbirth Machine is a good example of an album that has low fidelity but is not low quality in sound, as the griminess works for the compositional style and spittle-choked voice of Helmkamp.

The song composition is generally straightforward with a constant barrage of extreme metal in addition to some rudimentary samplism. Notably, the album begins with a two-minute sample of “Atmospheres” by Gyorgi Ligeti, which is best-known as the monolith theme in 2001: A Space Odyssey. “Power Elite” ends with a minute of what sounds like a field recording taken in a market with Helmkamp shouting admonishments to the listener. The tracks run from barely two-and-a-half minute thrashers (“Iconoclasm Conquest”) to seven-minute proto-war metal dirges (“Stillbirth Machine”). These experimental tendencies would be even further expanded on follow-up full-length Dawn Bringer, which utilized noise music.

Speaking of Helmkamp, the lyrics to Stillbirth Machine (and, by extension, the entirety of Order from Chaos’s discography) are better viewed as philosophies. As is common with war metal bands and similar acts, Order from Chaos’s lyrics are deeply embedded in critiques of extant social and political norms, harboring a misanthropic perspective toward mankind that is characterized by action. “Power Elite” lambasts against political elites who seek to dumb down and control the population, with Helmkamp comparing modern American culture to cattle in a slaughterhouse, with those who recognize their state being little more than puppets who are aware of the manipulation but powerless to change anything. “As the Body Falls Away” juxtaposes carnal delights with graphic imagery of a body undergoing decay, but it foresakes the gore of Cannibal Corpse for the nihilistic depravity of Hellraiser, in which extreme pain and orgasm are one and the same.

All of these quirks combine to make Stillbirth Machine an exceptionally unique album even among the experimental tendencies already present in early old school death metal. Order from Chaos mix active philosophy, crunchy guitars, and a whirlwind mix of death, black, and thrash metal in a way that set the career for all three members even after the band’s demise. And the best part of it all – even after Stillbirth Machine ends, there’s still two more full-lengths and a hell lot more of demos and EPs to go.