Sunbleach is starting a major update to the format by which album articles are written. At the moment, the album articles contain the recommendation, the summary, the tracklist, and the stream. From now on, articles will also include a brief “album information” section at the very beginning of the article that displays artist name, album title, type (e.g. EP, full-length), release date, label, and – most importantly for collectors – format. The “format” section will list the type of format (e.g. cassette), the edition (if applicable), the respective label, and the year of release. I hope that these changes better reflect the idea of Sunbleach as a vaporwave “resource” and archival service rather than a just being a music critic’s blog.

This will take some time to update, as it will require me to manually go through each of the nearly 400 album articles and add in the information respective to the new fields. I expect this to take through the end of February. Any significant updates will be posted to the Sunbleach Twitter page.

Below is an example of the new section, taken from the article on (SEASON_1) Deathpowder: 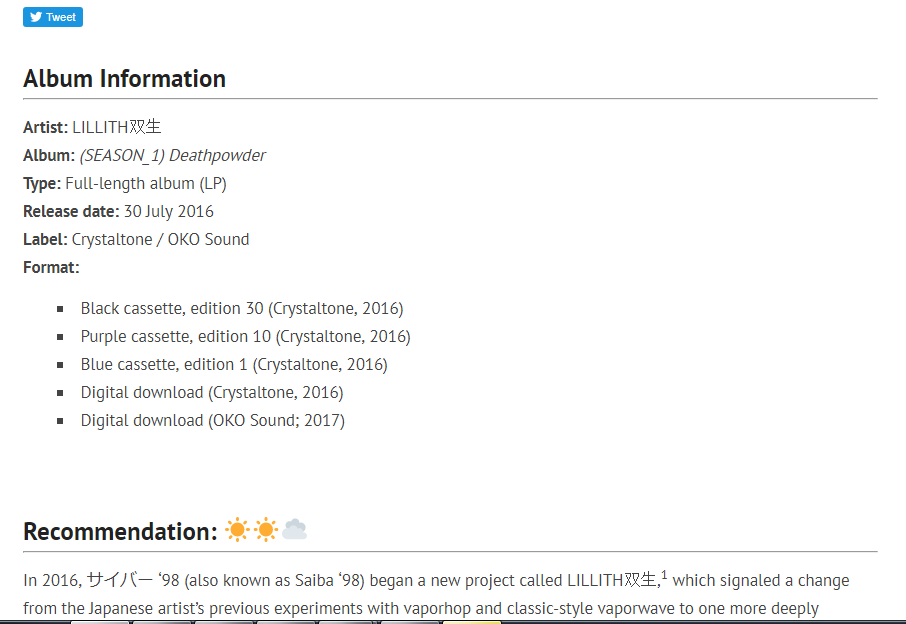 A brief formatting change will be made to the excerpts, which are those brief blurbs you see underneath each article when going through the main navigation windows that hold 100 to 150 characters. Previously, these were just automatically-grabbed pieces from the very beginning of each article, but it didn’t really give any usable information. Each feature, album article, and news article will now have more informative excerpts, generally going to be a relevant quote from the article.

Finally, one additional change will be made to the navigation panel. Sunbleach has received several comments from readers that they had clicked on certain tags such as “vapornoise” or “classic-style” to find new music, but the sheer number of articles made it difficult to find stuff in particular. On one hand, it’s a good problem to have – despite claims to the contrary, vaporwave is far from dead; and if you include hardvapour, ghost tech, and dreampunk then the genre is only expanding every day. There are usually between twenty-five and thirty albums that are released per week, and that’s only counting those that are released through established labels. I am going to make it easier to find album articles by subgenre and category by adding a new navigator in the topmost menu. I will probably do this as I’m doing the metadata updates necessary for the “album information” section in the album articles, so this will likely take as much time as the article format update so I’m efficiently using my time.

Thank you for reading Sunbleach, and I hope this helps you find more new and exciting music!

Sunset Grid releases “Anomalous Planet未知の” by Tower Of The Sun幽霊の次元